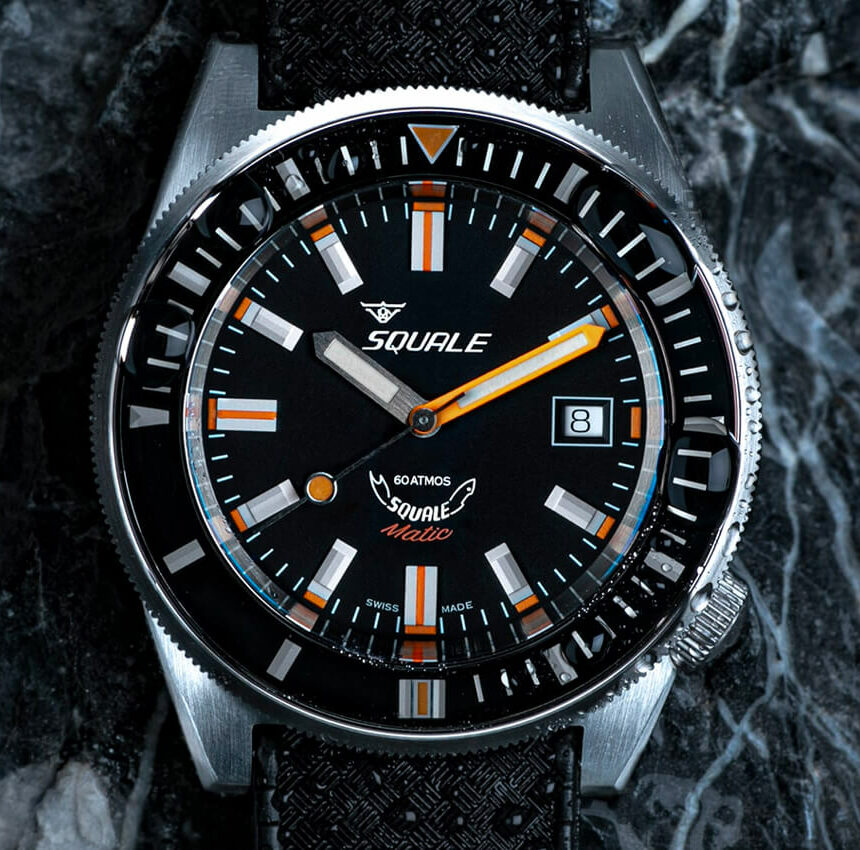 The history of Squale watches

Squale is an iconic Swiss watch brand with a reputation for producing high-quality diving watches.

The company was founded in 1946 by Charles Von Buren, who started the business as a small case and watch component supplier to independent and high-end Swiss brands. However, Von Buren took a keen interest in the trend of dive watches and began creating and designing watches specifically suited for this purpose.

The brand name “Squale” originated from the Italian word for “shark,” and the classic curved shark image later became the brand’s distinct logo on its dial. This symbol became synonymous with quality Swiss-made diving watches, as several brands used the same logo in their dials and case backs.

Before producing its own watches under the Squale brand, the company was a large case manufacturer for many other well-known labels in the watch market. They sold cases to brands such as TagHeuer, Blancpain, Sinn, Doxa, and many more. They also provided watches unofficially for special corps of armies such as the paratroopers of the “Folgore Brigade” and the Italian Navy’s Diving Corps.

Squale has always dedicated itself exclusively to the production of watches and meeting the highest quality standards to ensure reliability in extreme conditions. From 1959 the company solely produced diving watches and the brand is known for being the choice of professionals, including the Armed Forces, athletes, and underwater workers. All their watches are assembled by hand by expert watchmakers in their facility in Ticino, and go through numerous tests before they are approved for sale.

They continues to follow the values of Swiss watchmaking tradition and craft high-quality, reliable and long-lasting watches, with a rich heritage of providing outstanding product and service to customers.

Watches for police and military divers

Squale has a strong connection with various organizations in the military and law enforcement fields, and has supplied watches to several prestigious institutions over the years. Some of the notable organizations that Squale currently supplies watches to include:

These long-standing relationships are a testament to Squale’s reputation for producing high-quality, reliable watches that meet the demanding requirements of professional divers and military and law enforcement personnel. Squale continues to work closely with these organizations to ensure that its watches are suitable for the extreme conditions of deepwater diving and other demanding environments.

1950 Charles and Helene Von Buren establish the Von Büren SA watch factory in Neuchâtel, Switzerland. Inspired by their personal passion for diving and water sports, their focus immediately turns to sub-aquatic watchmaking – still an unexplored field at the time.

1959 Von Büren SA registers the Squale brand and obtains the first patent for the production of diving watch cases. during the 70’s Introduction of the 1521 model. In the following years, Squale becomes the official supplier for the Italian Navy and for the “Folgore” Paratroopers Brigade.

1980 The relationship between the Von Bürens and the Maggi family, the Italian distributors of the brand, becomes closer thanks to collaborations in Italy such as performance tests carried out on the island of Giglio. 1982 In preparation for his retirement, Charles Von Büren sells the brand to the Maggi family.

2016 Squale becomes the official supplier to the Italian State Police Divers Unit, with a special edition of the 2002 model created according to their specific requests. The model then becomes available to the public (“2002 Black Black Round Dots”).

2019 60th anniversary celebration of the birth of the company. The SUB-39 collection is launched with a limited edition of 150 pieces.

Subscribe to our newsletter
Get 10% off your first purchase

Receive exclusive offers & updates before anyone else.